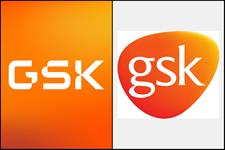 Global healthcare giant GSK has updated its brand identity to symbolize a “unity of science, technology and talent to fight and defeat disease”. The new identity was designed by brand consultancy Wolff Olins and will be rolled out in the coming months.

The updated identity follows GSK Ahead Together’s new focus and growth ambitions, as well as its proposed spin-off this year, which will see GSK become a company focused on biopharmaceutical innovation. Its consumer business was renamed Haleon.

“GSK is heading towards its most significant corporate change in 20 years,” said Emma Walmsley, CEO of GSK.

The brand and agency also prioritized accessibility when developing assets, which were tested for readability both on screen and in print. For example, a custom typeface by Face37 was designed using ink traps, where corners or details are removed from the letters.

“Our ambition was to create a brand identity that signaled extraordinary adaptability,” explained Emma Barratt, Global Executive Creative Director at Wolff Olins. “But we had to balance that with a need for warmth.”

From Nike to Tory Burch, these are the brand deals you can’t miss at Nordstrom this weekend